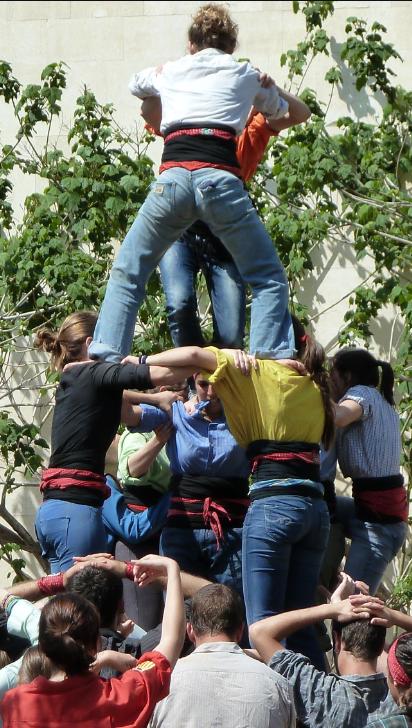 A “castell” is a human tower built traditionally in festivals at many locations within Catalonia. At these festivals, several colles castelleres or teams often succeed in building and dismantling a tower’s structure. On November 16, 2010, castells were declared by UNESCO to be amongst the Masterpieces of the Oral and Intangible Heritage of Humanity.

In Catalan the word “castell” means castle (“Castello” in italian, btw). A castell is considered a success when stages of its assembling and disassembling, can be done in complete succession. The assembly is complete once all castellers have climbed into their designated places, and the enxaneta climbs into place at the top and raises one hand with four fingers erect, in a gesture said to symbolize the stripes of the Catalan flag. The enxaneta then climbs down the other side of the castell, after which the remaining levels of castellers descend in highest-to-lowest order until all have reached safety.
Aside from the people who climb to form the upper parts of the tower, others are needed to form the pinya, or bottom base of the castell, to sustain its weight. Members of the pinya (most often men) also act as a ‘safety net’ if the tower structure collapses, cushioning the fall of people from the upper levels. The castell is built in two phases. First, the pinya the base of the tower is formed. People forming higher levels of the tower move to a position from which they can easily get to their place in the tower. This is done slowly and carefully and as subsequent base levels are completed the castellers in the pinya determine if their base is solid enough for construction to continue. Then, when the signal to proceed is given, bands begin to play the traditional Toc de Castells music as a hush comes over spectators of the event. The upper layers of the tower are built as quickly as possible in order to put minimal strain on the lower castellers, who bear most of the weight of the castell. The disassembly of the castell, done amidst the cheering of the crowd, is often the most treacherous stage of the event.
There is a form of the Castell, generally referred to as ‘rising’, in which each successive layer is added from the bottom by lifting the castell into the air, stage by stage. It is held that this form takes even more skill and strength and a great deal of practice. Four levels complete have been observed and five attempted, but it is said that the record is six or perhaps seven.

Here is a video i shoot in Barcelona in April 2011 where a group of Uni students were practicing their Castell skills.
Long way to go before they reach the top (litterally):